Virtual Concerts in the Pandemic 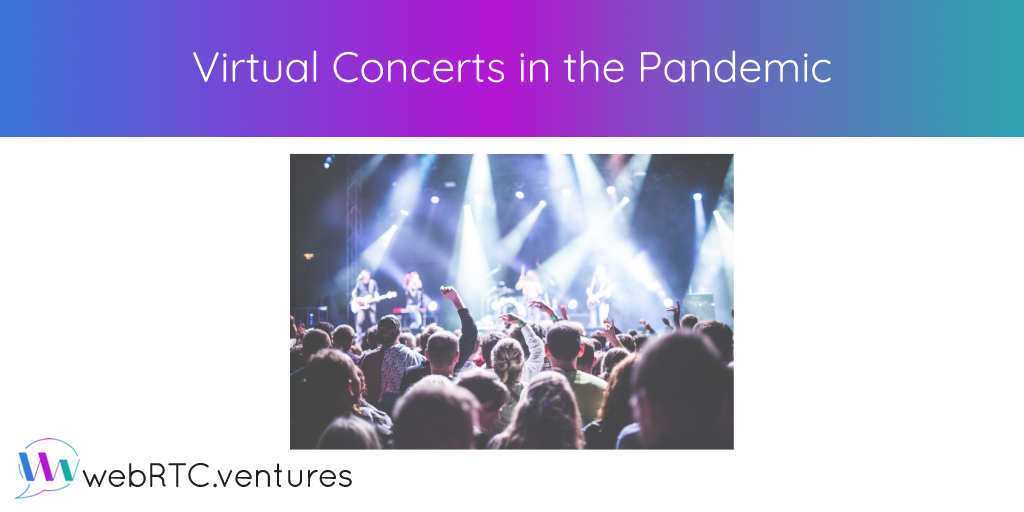 Music plays an important role in my life. I’m not talented enough to play music, but I have found that live music simply makes me a better person. It gives me a fresh perspective, reduces my stress, and allows me to step away from work and decompress. Live music makes me happy.

One of the cruel challenges of the COVID-19 pandemic is how broadly it cuts across society, and how it has stolen from us the very tools we use to combat stress. I’m fortunate to have a job and work in an industry that is needed now more than ever (i.e., live video applications). I’m also fortunate that my family is healthy. Even though the country where I live (the United States) is doing a fairly horrible job of fighting the pandemic, I’m fortunate to live in a region that is doing okay so far.

Compared to others, I have little to stress about. But things globally and in the US are very stressful right now. Attending live concerts is one of the things I’ve been missing most in this pandemic, second only to travel.

In this blog post, part of our Virtual Events in the Pandemic series, I’ll share thoughts on live concerts in the age of social distancing. At WebRTC.ventures, we build custom live video applications for a range of use cases from telehealth to virtual events to corporate collaboration tools and more. Our services are in high demand right now, particularly for virtual events.

I won’t share the details of confidential conversations I’ve had with current or potential clients, but music concerts are definitely one industry hurting in the pandemic and looking for creative solutions.

The music industry is close to my heart not only because I wish I could go to a music festival right now, but also because I worked in the music industry many years ago. Prior to starting my own company, I was a software architect at Musictoday (later owned by Live Nation and Ticketmaster at various points). I worked in e-commerce applications there for a while, but spent most of my time leading the technical team that built an online ticketing system for many of the biggest musical acts of the time, including the Dave Matthews Band. We spent many days in the winter and early spring nervously watching tickets go on sale for major summer tours, watching the seats sell in real-time, and always trying to stay one step ahead of ticket scalpers.

One of the first live virtual concerts I attended during the pandemic was my favorite band, Pigeons Playing Ping Pong. Part of “Live From Out There,” they played at a music hall with their full light show but no audience. Echoes were heard when they spoke between songs, but they showed an impressive amount of energy without a live audience. I streamed a few shows from my laptop and sat by a campfire in my backyard with some cold beers.

It wasn’t the same as seeing a show live, but it felt better than just streaming the music over Spotify. My favorite music these days is mainly jam bands. There’s no replacement for hearing the band play live and make each show a unique blend of songs and solos.

Pigeons also put together the first virtual music festival I attended – Homefest (a play on their annual music festival, DomeFest). While many bands have been live streaming in-home concerts on Facebook, Homefest tried to recreate the music festival experience. They recruited multiple bands to play remotely over the course of three nights. The event was well produced, with smooth transitions from one band to the next.

The screenshot below gives a taste of what the virtual experience was like.

Homefest used a tool called LiveXLive, and it allowed for a producer to switch between multiple camera angles. Sometimes the live feed showed cameras for each band member. Other times it showed only one camera angle at once. The primary interactivity with fans came from a text chat on the side with the ability to send hearts. 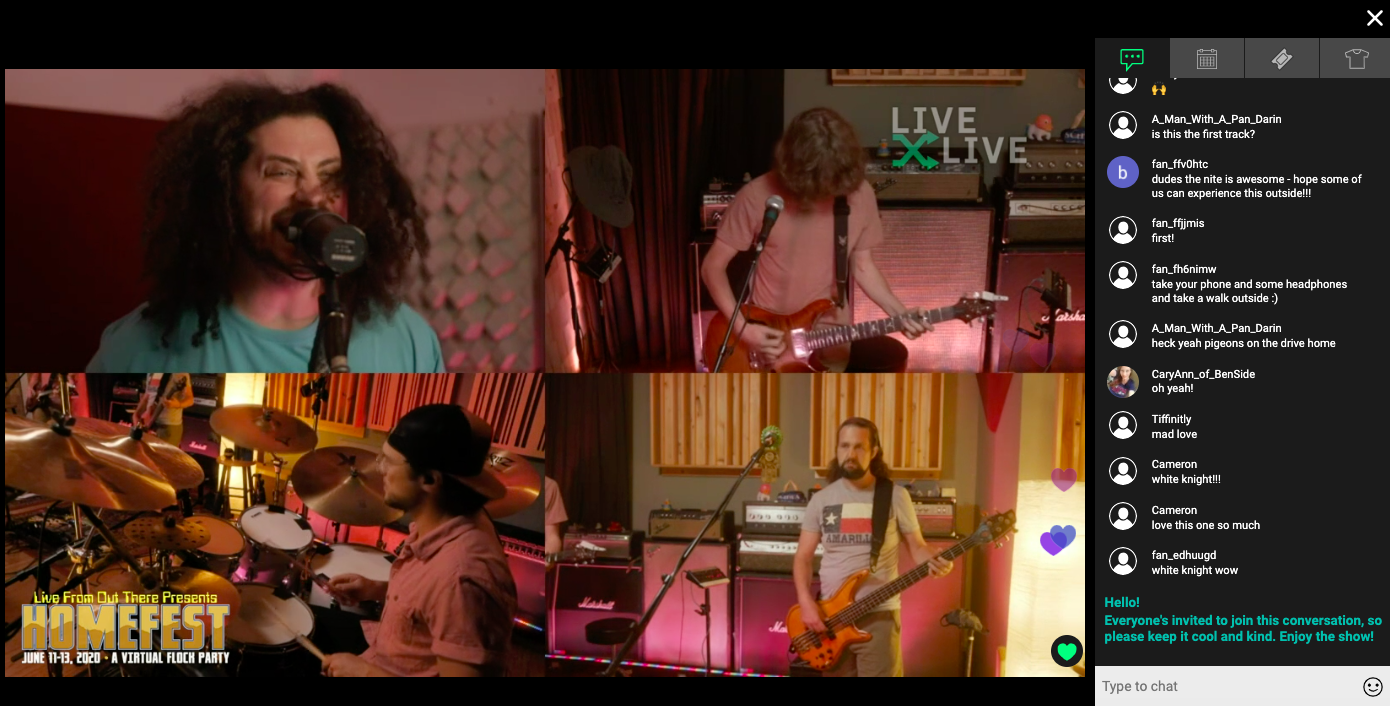 A tab in the top right menu allowed viewers to see a schedule of the bands playing that weekend. Another enabled the purchase of tickets to the other shows if viewers didn’t already have the “weekend pass.” There was also a merchandise button, which showed a few items for sale; I was pleased to see that this button linked to a Musictoday e-commerce store. Somewhere behind the scenes of those mouse clicks is perhaps still some code I wrote well over 15 years ago. Hopefully most of it has been upgraded by now! 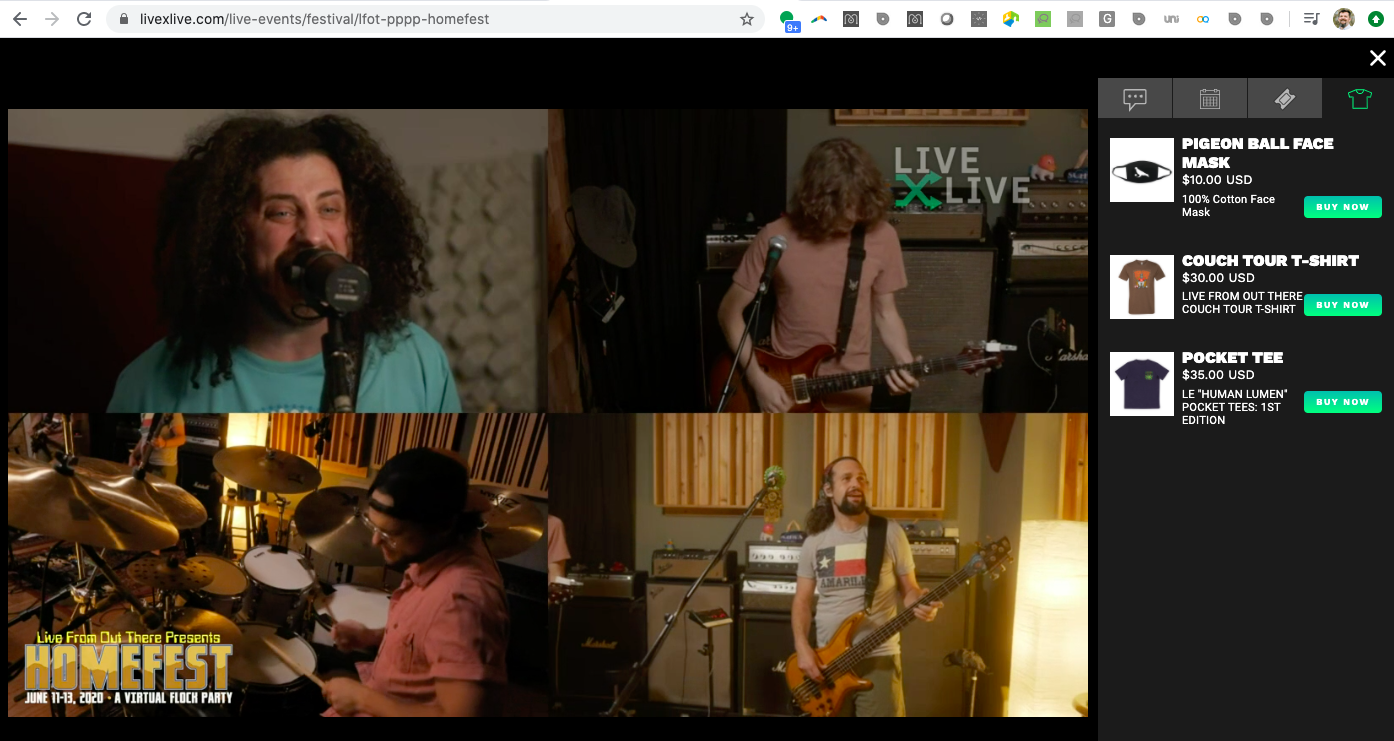 From a technology perspective, it looked like the LiveXLive tool provided a pretty standard live broadcast experience using HLS technology. The streams were not actually in real-time but delayed by 30 to 60 seconds. Those delays that HLS introduces mean that not all viewers are seeing things at the same exact time, and none of them will see it in real-time, but they will all receive a high-quality video feed and be close enough in sync that the text chats won’t get too awkward.

The other good thing about HLS is that it scales very well to a large number of viewers. You can scale an HLS video stream to millions of people, but you can’t scale a full peer-to-peer WebRTC video chat to more than a few dozen participants.

That doesn’t mean WebRTC and large scale broadcasting can’t be used together, however. WebRTC can be used to connect multiple remote participants together prior to sending the composited stream out for broadcast. There are also platforms like Millicast that allow for a WebRTC-based implementation that can be streamed to large audiences without the delays of HLS broadcasting.

It’s doubtful that any WebRTC was used in Homefest since there were multiple cameras in the studio with the band. Those cameras would have been routed together into some production software like OBS. The composited stream was sent out to an HLS broadcast server, or maybe a more real-time streaming solution like Red5Pro.

While Homefest was great for me personally, it still lacked the technology possible these days to build more interactive experiences.

With WebRTC, you can build interactive experiences where fans can do more than just chat while watching a broadcast stream. Festivals like Homefest were a positive first step, and I applaud the bands like Pigeons who made the early stages of the pandemic much more bearable for me by bringing back some form of live music.

So what’s next for the music industry? Packed music halls and outdoor music festivals with thousands of fans are not coming back soon unfortunately—at least not here in the United States, and probably nowhere until there is a vaccine.

Another of my favorite bands, The Revivalists, were part of a “Drive In” show in their home city, New Orleans. The band played a stage show, but instead of fans clamoring for space in the front row, the band looked out over an audience of socially distanced cars, with fans either in their cars or near them.

I would have loved to be at that show, or any live concert, but it’s not the same experience. Depending on how far you are parked from the front, you might not even see well. At the NOLA Drive In, they had large monitors showing video to help those in the back to see.

Another band playing at the NOLA Drive In was Tank and the Bangas, with special guest Big Freedia. The Instagram video below gives you an idea of what the in-person experience was like.

More crucial than the fan experience, bands must make money if these Drive In style shows will be worth it. It will be hard to make enough money with a limited size audience. So The Revivalists had a hybrid component, where fans could buy tickets to an online stream of the show.

Hybrid events with a mix of in-person and remote participants are going to be very important as the pandemic continues. I think they will even survive the pandemic itself. Look for more of that in the future as a way for music to still get out there, even if only a small number of fans can attend in person safely.

One of my favorite music festivals, LOCKN’, is nearby and a regular summer experience for my family and friends. Over the years, we’ve seen shows by many of our favorite bands. This includes The Revivalists, Pigeons Playing Ping Pong, Moon Taxi, Phish, Umphrey’s McGee, Tedeschi Trucks Band, and every variation of the living members of the Grateful Dead you can imagine.

LOCKN’ has looked at a variety of options for this year’s festival, based on the emails I get from them. (I have no insider knowledge of their plans. Anything I say in this blog post might be inaccurate by the time you read it. See the LOCKN’ website.) Like other major festivals, they first pushed the shows back optimistically; as it’s become obvious that the pandemic won’t subside anytime soon, they’ve had to come up with alternate plans.

Their most recent solution sounds like an in-person concert in October with a “bubble” around the event. This is similar to what many sports leagues are doing right now. To attend the show, you have to buy a weekend camping pass. When you arrive, you will be tested for COVID-19 and then permitted to enter the festival grounds. You won’t be allowed to leave and re-enter, so I think only campers will see the concert in-person this year.

I think that’s a creative solution, but personally I’m probably not comfortable with it. And certainly that will limit their audience size, so I’m not sure how it will be financially viable, even with high ticket prices that include the camping and on-site food sales. I’m hoping they also offer a live stream ticket for sale, so I can watch from home while drinking a beer next to my campfire.

Looking ahead at virtual concerts

Virtual concerts in the pandemic is an evolving thing. We started with simple livestreams using existing tools like Facebook Live, and bands are moving to more complicated and well produced events like Homefest, but still with limited interactivity with the fans. As the music industry adapts to hybrid concerts with a mixture of in-person and remote fans, we can expect that to become the norm well into the 2021 touring season. The pandemic unfortunately is not coming to an end anytime soon, but as they say, “the show must go on.”

Are you in the music industry and have creative ideas for how you’d like to produce virtual or hybrid concerts during the pandemic? Do you have ideas for how to improve those experiences for your artists and their fans?

At WebRTC.ventures, we have experience building live video applications for a variety of industries, and we’d like to help you bring your ideas to life.  Contact us today, and let’s bring back live music!