For the last three years, we’ve been working with TokBox building Interactive Broadcast Solution (aka IBS), which is a broadcasting application that enables you to create events and to broadcast them live to a large audience.

Interactive Broadcast Solution v2.0 is now open source. This means it’s public and anyone is now able to clone the repository, test the app, and to contribute with the project by doing pull requests like any other open source project.

How does IBS work and what can you do with it?

IBS connects presenters, guests and viewers via real-time video and voice communication using the OpenTok API. Viewers will not only feel like they are part of the event, but like they are truly part of it by getting in the line and talking directly to the presenter and to the guest on stage. 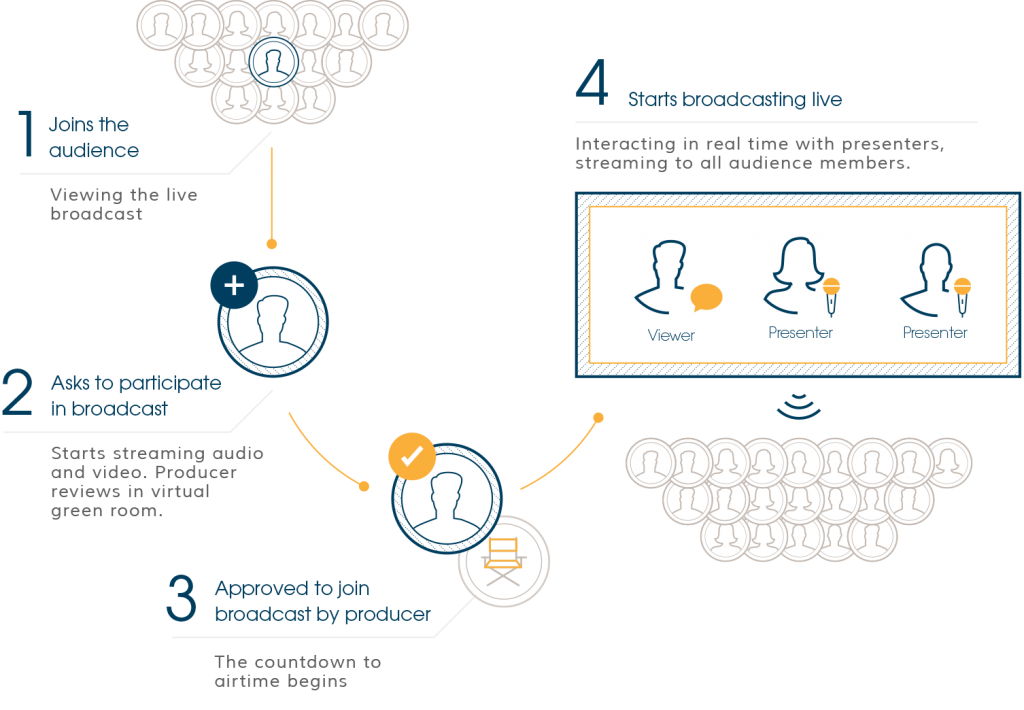 Interactive Broadcast Solution has been successfully used by Fox Sports, MLB and NHL for their weekly shows and interviews with sport celebrities. The fans participate and ask them questions live either from any of the most common used browsers without downloading any software or plug-in, or through their smartphones and tablets using a native mobile app for both Android and iOS.

Moderation and Control of the event

The show is managed end-to-end by a backstage producer. The producer has moderation capabilities and the complete control of the event.

The Producer starts and stops the event, manages the recording and can mute / unmute the audio and video of all the users. He or she can also have a text-chat and video-chat conversation with the viewers, and choose any of it to go live along with the presenter and guest. 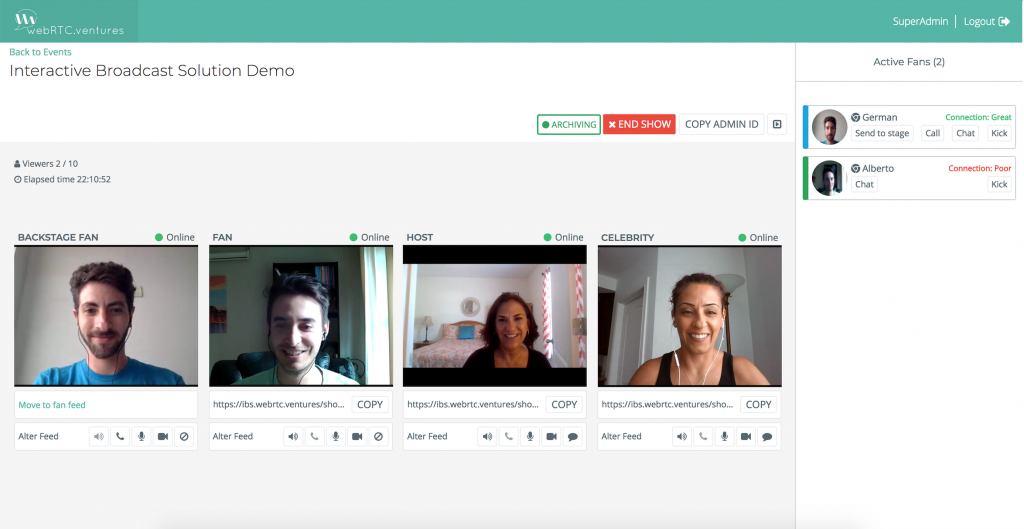 While Interactive Broadcast Solution can support 3000 real-time connections, the number of supported viewers can be considerably increased by transmitting the event via HLS feeds and RTMP.

This allows you to broadcast the live event in other channels such as Facebook Live or YouTube Live and target your content to a much larger audience.

Embed your event simultaneously in any Web or Mobile Application

IBS is prepared to be embedded inside a website page with a few lines of code, making it very simple to customize the look & feel.

This is compatible with any website and CMS framework like WordPress. In addition, IBS also has a library for iOS and Android that can be integrated into your already built native mobile application.

Multi-tenancy allows you to have multiple administrator users, each one with his or her own credentials and with a restringed access to its own events. This feature allows you to run several events simultaneously under the same IBS instance, controlled by different backstage producers.

We can customize IBS for you!

Contact us today to see a demo. We can help setup your Interactive Broadcast Solution instance and customize it with your brand and design! We can also expand the features to your business needs and requirements.

Webinars or live streaming video from an event are great, but Spotlight is for much more interactive events. In partnership with TokBox, we built an application for a sports network to have a host, athlete/celebrity, and their fans all interact together, live, using WebRTC.

Our team of development experts built an application based on the TokBox WebRTC API which allows fans to “get in line” to speak with the celebrity. A backstage producer checks that the fan’s video/audio connection is strong, vets their questions, and then puts them live “on stage” with the host and celebrity!

We can build live streaming event capabilities into your organization as well.  These types of tools have applicability for online education, training, meetup groups, interactive webinars, and more. We have adapted these concepts to multiple situations, and it allows a large number of participants to view your events, and then to bring select participants on the stage for interaction with the host and their guest.  Our live streaming applications have included other features you may need, such as:

Contact us today to build your custom-designed live streaming application!