A MUST-READ: 5 Things to Expect in WebRTC Development in 2018! 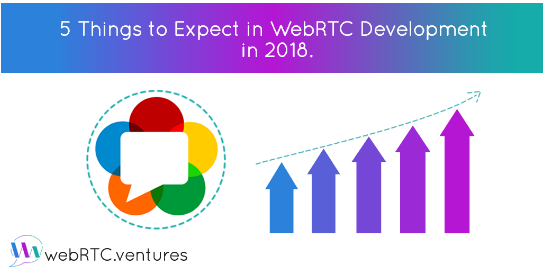 2017 was an exciting year for WebRTC. The technology saw a lot of improvements and  even integrations with other trending technologies. Below we will share our insights about the 5 things to expect in WebRTC development in 2018, but first let’s quickly review the webRTC events of 2017.

Probably the most important announcement was the release of WebRTC 1.0 which brought with it tons of bug fixes, more APIs & standards and a pair of powerful testing suites.

Also, two important companies finally joined the party last year, we are talking about Microsoft & Apple, who announced that their flag browsers: Edge and Safari respectively, are adopting WebRTC.

This event by itself gave us a lot of material for predicting what may come in the short term.

You may have heard of trending technologies such as Machine Learning and Augmented Reality? Well, some big companies in the WebRTC ecosystem have found their way to integrate the aforementioned as a way to improve calls quality and extend the functionality that a WebRTC application can offer.

Finally, the webRTC technology reached its sixth year of life and it is maturing really well, consolidating as the future of real-time communications.

Now without further ado,here are our what to expect in webRTC development predictions for 2018:

Now that Microsoft and Apple have announced support for WebRTC, we expect that browser compatibility will not be a problem anymore.

This means that more companies will jump on board and the need for WebRTC development will increase.

As all major browser will support WebRTC, in 2018 we will see a proper cross-platform compatibility. This opens the door to new developments, that up until now, haven’t been possible.

WebRTC has received a lot of bug fixes and more are expected to come in 2018.

Also the new APIs and standards that accompanied the announcement of WebRTC 1.0 seek to reduce the differences between WebRTC implementations, and therefore improve the reliability.

All of this added to the creation of tests in the web-platform-tests project and the Kite testing suite will give us a more robust WebRTC for 2018.

VP9 codec, the next generation codec that will replace VP8, was announced to be in an advanced stage last year, so it’s highly probable that we will see it in action for 2018.

Also the AV1 codec, developed by the Open Alliance Media, entered in a code freeze in last October and it is projected to enter in another one on January. Some nightly builds of major browsers already include it, so we are probably going to see more of this codec late this year.

Rise of Support for Industry Devices.

WebRTC adoption has been increasing since its launch. While this increase has been limited to computers and tablet/smartphones, there is a growing interest in porting its capabilities to devices used in several fields, such as: medical devices, drones, IoT devices; in other words, anything with a processor and a browser, used to process information that needs to be delivered in real-time.

We expect to see more devices supporting real-time communication powered by WebRTC, for several purposes in various fields for this year. (And we will happy to help with that ( ͡° ͜ °))

Machine Learning (ML) has changed the way we use the internet and this year it will probably change the way we communicate too.

Some approaches that we will probably begin to see goes from using ML to identify a point of interest in a call, such as the caller/callee’s face or a whiteboard, and focus encoding resources on maintaining and improving quality in that specific area of the screen; to make use of speech analysis to generate data such as topics and keywords from a call as if it were a written conversation.

Augmented Reality (AR) can extend the use of the media that we transmit by allowing to add virtual elements to the real-world environment. We believe that in a few months we will begin to see applications that make use of AR in WebRTC, such as a sales application that show potential clients how a new piece of furniture will look at home, or how a new car will look at their garage.

Ok, we said before that we would only present 5 things to expect, but as a result of all the aforementioned,  there is one big thing that we cannot not mention: we are talking about the rise of enterprise solutions.

Sure, video/audio calls for pure communication or social media, but I personally believe that the next big thing we’re about to see in 2018 is the rise of enterprise solutions based on WebRTC.

Here we are not talking about the launch of next Skype (which may also be based in WebRTC by this year), but about integrating real-time communication solutions to daily enterprise tasks.

Thanks to the improved reliability provided by WebRTC 1.0, the addition of more codecs, the compatibility with all major browser and the integration of new technologies, WebRTC has reached a maturity state that has attracted the attention of more and more companies that look in WebRTC, a powerful building block for their enterprise solution

This means that 2018 will bring an increase of the need for new WebRTC developments in diverse areas such as customer service, telehealth, sales, etc.

We are expecting 2018 to be a busy year for everyone involved in WebRTC development, as it’s been told in a recent study made in partnership with CPAAS provider Vidyo embedded video adoption is on the rise. The time for adopting it in new projects is now.