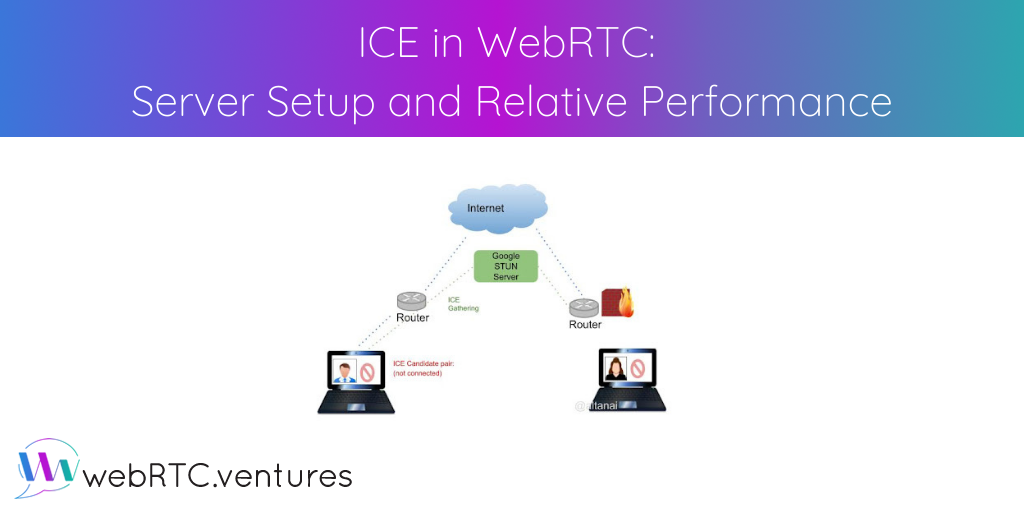 Private WebRTC endpoints are often shielded from the public internet by a network that does the mapping from source to the destination. The mapping facilitates traffic going in or out of the private systems to reach the correct host. This process is called Network Address Translation, or NAT.

While not necessarily restrictive, these interfaces need to be pin-holed to create a public-private pair for media streams to flow from the outside world into the WebRTC browser. This process of gathering candidates and prioritizing them in order to make a successful media connection with the remote peer, as defined in in RFC 8445, is called Interactive Connectivity Establishment, or ICE.

A large percentage of WebRTC calls have network restrictions for calls between parties who are not on the same network. This includes calls from a peer with symmetric public-private pairing (NAT) or calls from a network having additional firewall restrictions such as in universities or office spaces. These can face black video issues (missing feed/no packet reception) or fail at the ICE gathering stage leading to no connection. Such cases can benefit from two main protocols:

Additionally, there is TURN over TLS:

This post describes relative performance working with no ICE Servers, a public STUN server, and a self-hosted CoTURN server. The experiments are carried out through multiple restrictive network firewalls, public internet connections, broadband, as well as 4G data connection. The observations are noted at the end of each section.

If the peers have a blocking firewall policy and no means of establishing interconnectivity, the media stream will fail to reach remote from local or vice versa leading to either no connection or black remote video.

STUN: Successful connections in less guarded networks, but not for most enterprise firewalls and network policies

These work for simple NATing scenarios where private IP is linkedin to a public IP in a network such as Telecom provided networks (4G) or majority of Wifi networks. However, it does not work as well when there is a firewall restriction. Highlighting one such case below:

The configuration for this setup is non SIP, using only Google-provided STUN server.

A use case of WebRTC internals where the WebRTC client was not able to gather enough candidates to establish peer to peer media connection is shared below:

STUN performs network discovery and hole punching in a best effort to connect local and remote without directly affecting the media streams and steps out of the picture once connection is established. In contrast, a TURN server remains in the media path after the connection has been established, relaying the media packets through itself.

CoTURN is an open-source STUN and TURN-supported ICE Server. It is well contributed by the developer community. It is RFC-compliant and frequently used by VoIP Integrators for their real time communication solutions.

Here is a quick overview of installation CoTURN and its usage for a non-SIP communication client: https://webrtc.ventures/2017/08/quick-guide-stunturn-webrtc/. Once the CoTURN service is running, we will need the following adding in our JavaScript WebRTC webpage:

From the WebRTC internal dumps file downloaded and using the tool provided at https://fippo.github.io/webrtc-dump-importer/, we can post analyze the WebRTC session:

TURN’s relay-based ICE candidates are generally prioritized lower than STUN’s reflexive candidates. The QoS metrics for this study, given no firewall restrictions, shows indistinguishable performance for local connections (i.e., within the same region and network). However, TURN performs significantly better than STUN over long distances (i.e., WebRTC peers across continents). With firewalls, TURN is the best proven and widely used methodology to overcome network restriction and establish peer to peer stream.