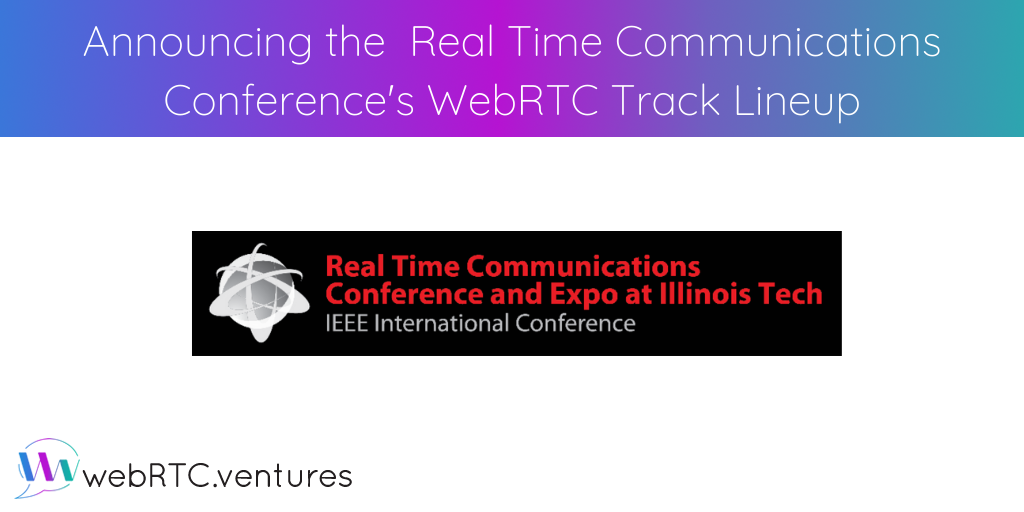 As the chair of the WebRTC & Real-Time Applications track at the 2021 Real-Time Communications Conference at Illinois Tech, I’m very pleased to share the list of speakers and topics.

The October 11-13 conference will once again be virtual — and free! So there is no reason not to take advantage of this opportunity to hear from what’s happening in the WebRTC community. The answer is, of course, a lot! WebRTC was certainly a savior to so many as we were forced to move so much of our personal and professional lives online.

WebRTC.ventures is proud to sponsor the conference and I am personally pleased to chair the WebRTC track. There are so many interesting presentations for this 2021 conference — about WebRTC, Programmable Real-Time Networks, Next Generation Emergency Communications Services, Internet of Things, VoiceTech, and more. We look forward to sharing them with you. Register today!

15 Years of FreeSWITCH and 3 years of SignalWire have been focused on empowering the developer. Easier said than done. Developers are a special breed.

TADHack Global 2021 ran the weekend before Enterprise Connect; which gave us a chance to show-off the global hacking talent to the programmable communications industry. We’ll review some of the impressive creations that are making a difference in people’s lives.

The merging of realtime and streaming technologies has exposed the need for a common set of tools to allow developers to build next generation communications applications.

This talk will introduce one of the central tools in the new web media toolbox, WebCodecs. The WebCodecs API provides low-level access to the codecs already available in browsers. When combined with other APIs under development (such as “Breakout Box”, WebTransport and WebGL) and existing APIs such as Data Channel, Media Capture and Canvas, WebCodecs can be used to improve existing applications as well as to create new applications blending streaming and realtime communications techniques.

We will cover the WebCodecs API as well as introducing other APIs often used with it. The session will include demos illustrating what the new APIs are capable of.

Real Time Media is more than just delivering media from A to B using codec C. In this session I’ll go over some of the tricks of the trade in how we tackle offering “professional grade” video and audio to users of Broadcaster.VC and how you can go about applying some of these tricks to your app.

Despite the rise of video, voice communications isn’t dead – but it is changing rapidly, adopting more useful characteristics than a plain-vanilla phone call. There are three types of “context-based RTC” that are emerging:

Voice *in* a context – for example, voice-chat embedded inside a game, realtime drop-in voice chat like Clubhouse and Twitter Spaces, or push-to-talk voice for a private 4G network at a port or industrial complex.
Voice *using* contextual data & IoT – for instance a personal safety-alarm linked to a fall sensor, or a contact centre using emotional analytics to better deal with customer complaints
Voice *optimised* for a context – for instance, adjusting the noise-cancellation setting to the user’s ambient surroundings

Together, context makes voice communications more useful, productive and fun. It also works better than video for many use-cases

CPaaS generally provides comprehensive functionality via high level APIs. This provides a good abstraction of the inner workings of WebRTC away from application code. This then allows application developers to focus on the use cases and business logic of the application.

While CPaaS libraries provide high enablement of building WebRTC applications, maintaining that application code can become difficult without adhering to general software best practices. CPaaS libraries generally provide a service-like structure of APIs which may be different from what many frontend frameworks generally optimize for.

This presentation will look at design patterns, best practices, and philosophies for building maintainable WebRTC applications.

This talk will provide a diagnostic demonstration of the finalized WebRTC 1.0 specification as it is currently implemented in leading desktop and mobile browsers. The talk will also outline the state of WebRTC-adjacent API implementations, such as MediaStreams and Blobs. Attendees will receive web-available example code illustrating the remaining necessary polyfills and fallbacks for handling perfect negotiation, binary data channels, and media streams in older browsers as well as those with lagging implementations, such as Safari on both MacOS and iOS. The talk will conclude with a brief look at open issues and WebRTC bugs on file with major browsers, and project their likely resolution timelines.

HOMER provides an open-source capture lego set designed to build open and distributed monitoring, troubleshooting and data mining integrations for modern cloud Voice, VoIP, Mobile and RTC architectures, providing everyone with the same tools used by some of the largest enterprises and operators worldwide. Let’s discover and learn how to use the QXIP stack components and their many integrations to build your dream end-to-end monitoring stack!

Several different technologies have been designed over the years to implement broadcasting of streams to large audiences over the Internet. RTMP, HLS, DASH and others have been the most commonly used in recent times. That said, the increasing need for closer-to-real time streaming solutions that minimize delay as much as possible have recently pushed for a change, and while WebRTC as technology was initially conceived for peer-to-peer conversations, the pieces are all there to use it as a broadcasting tool as well.

This presentation will describe the problem space and challenges, and introduce WHIP (WebRTC-HTTP Ingest Protocol), a protocol proposal to partially address it. It will then address the related standardization efforts in the WISH (WebRTC Ingest Signaling over HTTPS) IETF working group, and discuss a sample implementation of the protocol on top of Janus, an open source WebRTC server.

Peer-to-Peer connections between browser-based clients, and optionally native clients, is a specific usage of WebRTC. Different solutions, like WebTorrent, have emerged to leverage WebRTC Data Channels for this purpose.

However, a signaling server, also called “tracker” in such a Peer-to-Peer setup, is still necessary, which creates a central single point of failure in an otherwise distributed system.

In this presentation, we will explore the challenges in designing a WebRTC Peer-to-Peer network without a central signaling server, or “trackerless”. We will present Legio, an experimental distributed signaling protocol, and discuss the limitations of such an unconventional architecture.

Excitement at the fringe of WebRTC – Sean DuBois, Pion.ly

WebRTC is the lingua franca of conferencing. Almost every new project coming out uses it, but what else can you do with WebRTC? Learn about the interesting projects on the horizon. Pion is being used to power VPNs, cloud dev environments, game streaming, robots and massively scaled Kubernetes WebRTC installs. We will talk about these interesting projects and how Pion’s simple composable API could power yours next.

18 months into the pandemic, this will be a “lessons learnt” and improvements talk. We will cover how we enabled products to be more reliable, set better expectations with end users, and closed call quality tickets with high customer satisfaction with a small team.