Wearables, the Internet of Things, and Healthcare

Home 2015 November Wearables, the Internet of Things, and Healthcare 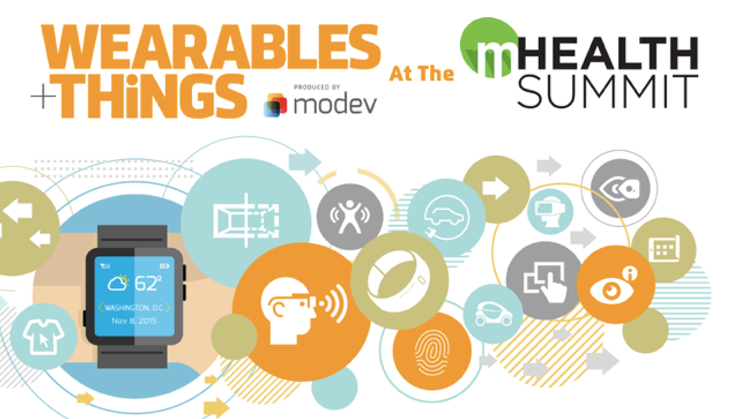 As a WebRTC developer, I understand the impact that WebRTC is having on telemedicine. Bringing secure video chat into the browser is opening up a lot of possibilities in telehealth that were previously difficult or impossible. We’ve had a number of interesting calls lately with potential clients looking to apply WebRTC to a variety of telehealth situations.

But there is a lot more to telehealth than just video chat, which is why I enjoyed a chance to attend the MoDev “Wearables & Things” health care conference that was part of the larger mHealth Summit in Washington DC. I spoke on “Building HIPAA compliant video chat applications with WebRTC”, but others there spoke on telehealth with wearables, and it was really interesting.

The following are a few takeaways I had from a selection of the presenters at the conference.

The team at Kollabio is working on IoT in healthcare, and Ashok spoke about how IoT + Wearables adds value to telehealth by creating better “clinical context.” He mentioned a personal desire to better track the health of his aging parents in India, even though he lives here in the US. This personal example drove home the statistics about the global value of IoT in healthcare, which Ashok says ranges from $117 Billion to $2.7 Trillion by 2025, depending on which study you read. The point is, the value of IoT in healthcare is BIG.

Alexandra talked about how the team at the App Assocation tried lots of different wearables in the personal health area and blogged about their experiences. Their test grop would focus on different wearables each week and set personal health/fitness goals. In all, they used 23 wearables and 50 apps over 99 days. Zombie Run was her personal favorite app – it encourages bursts of extra activity during run by having Zombies chase you.

But they had a number of other learnings that are worth considering as you build your own telehealth application for wearable devices.

First, the UI of the device matters – everything from the physical fit to the app itself. And battery life is a big deal to user adoption.

There is a wide variation on quality and accuracy, for instance they noticed that heart rate monitors using fingers were often inaccurate, and wrist based sensors were more accurate.

Alexandra reported that apps are great in particular for measuring chronic conditions, and small companies are already using them to understand things like diabetic foot ulcers, stress, fetal heartbeat, etc.

She also saw a lot of future potential in PERS apps – which stands for Personal Emergency Response System.

You could think of “life alert” as the PERS of today, and the PERS of tomorrow might measure geolocation for alzheimers, hydration level, movement for seniors, emergency notification for your family members, etc.

The biggest concern raised in Q&A during her talk, and a common theme of the day is that it’s hard to do innovative app development when the FDA requires approval for “medical devices”. Alexandra said there is no middle ground right now unfortunately, and so some developers won’t do anything that measures anything “medical”. Thus the prevalence of personal fitness apps and fewer medical apps.

This was an interesting talk to me. I know that drinking lots of water is a key part of a healthy diet, but I never thought about incorporating IoT devices into that. LifeFuels is a water bottle that measures how much you drink everyday, and also allows you to add in nutrition pods that inject vitamins and minerals into your water. In the future maybe medicine could be administered through your water bottle too, measuring your intake over the course of the day as you drink your water.

Jonathon talked about the wider market of health wearables though, pointing out there there are 45.7 million wearables shipping in 2015.

“Panel on Security and Privacy for IoT, Wearable and Mobility”

There were several interesting discussions on the security panel, but I will sum it up with the comment of the panelists made:

After lunch, I gave an overview of WebRTC, and how it’s peer-to-peer and encrypted architecture allows you to build HIPAA compliant video applications for the browser or mobile devices.

My talk was similar to this WebRTC and Telehealth webinar I gave recently, and so I recommend you watch that or read the summary there for the full content.

My point was basically this: WebRTC allows you to build video chat into the larger context of your medical application, so that medical professionals and patients can securely discuss patient cases without having to use a different tool like Skype or Hangouts.

Building a HIPAA compliant application is not easy, and simply choosing to use WebRTC doesn’t make it HIPAA compliant automatically. But the encrypted video chat of WebRTC, and even more so when combined with commercial WebRTC platforms like TokBox, means that you can build very secure telehealth applications. Our team can help!

In my talk, I mentioned the heart attack notification prototype that we built for the Apple Watch, so it was interesting to also learn about the Microsoft Band wearable, since a similar app could be implemented for that.

Ian gave an interesting overview of this wearable and it’s programming API, which supports windows, android, and iOS devices. The device has 11 sensors on it, including an accelerometer which he used to build this cool demo of using your hand motion to control a robot.

“The Impact of mobile on healthcare”

One of the quotes that jumped out at me from this talk was: “The holy grail of medical wearables is a non-penetrating sensor for measuring blood glucose levels” because of the growth of diabetes in our aging and frequently overweight population. That comment was interesting to me since when I was an Electrical Engineer many years ago, an entrepreneur approached the research lab I worked in with an idea for exactly that. I guess his idea never worked out since people are still working on the problem.

Another great quote from Morgan was that “Most people don’t understand HIPAA – they just think HIPAA means No!” HIPAA compliance is not easy to be sure, but he pointed out that the number one way wearables will get into our daily lives is insurance companies. They want us to use wearables to track our fitness, and share the data with them, in order to provide more accurate and hopefully lower premium costs. This has privacy implications of course, but it’s where we’re headed.

Have you heard of Alexa and Echo? Echo is a voice controlled device sold by Amazon, and Alexa is the friendly interactive app for Echo talks with you and answers questions, sort of like Siri.

While the more common demos of Alexa involve getting weather reports, re-ordering household goods, and playing your music by voice control, it could have medical applications too.

Christopher showed a First Aid Alexa Skills Kit that he built, which has Echo trigger a Lambda function on Amazon’s cloud to pull the first aid instructions from an amazon dynamo db. In other words, you can ask Alexa questions like “What can I do for bleeding” and she responds w/ medical advice.

There were also some cool product demos at the end of the day, and I refer you directly to their websites to learn more about them:

Some of the CyberTimez apps they talked about:
Google Glass app Cyber Eyez – reads text from a document, for blind users
Cyber Earz – app that you train about device sounds in your house (over timer, dryer buzzer etc). Helps those with high frequency hearing loss to “hear” devices in the home
Cyber Armz – voice commands to open/close doors for those w/ amputations
Cyber Trackz – “electronic trails of bread crumbs” to detect where a person is in the building for first responder. can also be used for travel training for the cognitively impaired.

All in all it was a great conference, with a lot of information packed into a single day. There is a lot of interesting innovation going on in healthcare, and certainly secure WebRTC video chats are part of that! Our team at WebRTC.ventures can help you build the “tele” and video parts of telemedicine, so just contact us for a quote!