Watch WebRTC Live #73: The Future of Broadcasting with WebRTC 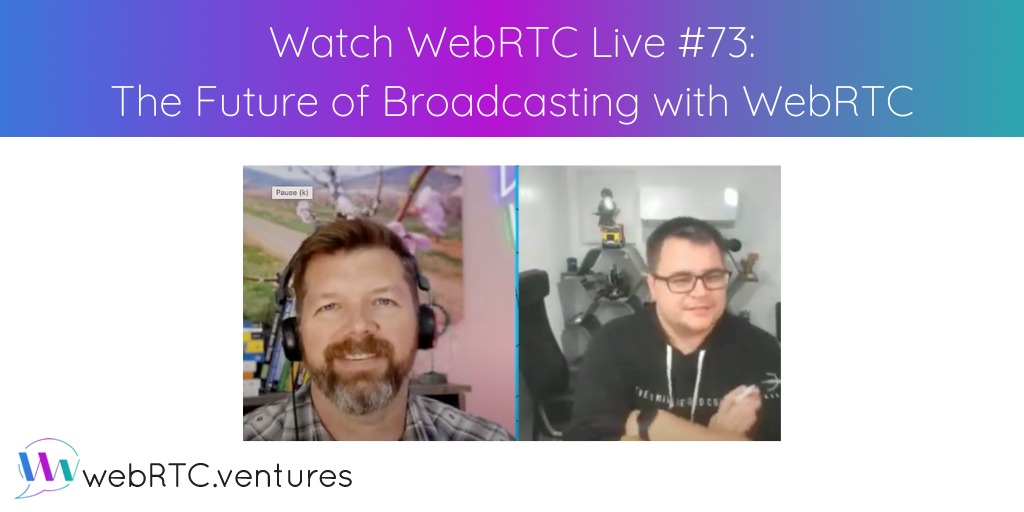 On November 16, 2022, Arin welcomed Dan Jenkins to WebRTC Live to talk about the increasing role of WebRTC in broadcasting. Dan is the founder of Broadcaster.vc, a “broadcast from anywhere” service which helps companies to bring in video streams via WebRTC connections and inject them into traditional broadcasting tools and workflows via NDI streams. He is also the founder of communications app consultancy Nimble Ape, director of CommCon, and a well-known leader in the VOIP and WebRTC advocacy space.

Dan and Arin started their discussion talking about the many conferences they’d both attended recently. The return to in-person conferences, the rise of hybrid conferences, and the future of virtual events was a theme throughout the episode, including the need for sub second latency when doing a hybrid panel discussion. (Read Arin’s recent blog post, How to Host the Ideal Hybrid Conference Panel Discussion.)

Dan talked about the founding of the two-year old Broadcaster.vc, including what he’s learned about broadcasting in general and how its architecture has evolved over time. He spoke about the move to Pion and the history of forcing open source tools like Janus, Asterisk, FreeSwitch to do things they weren’t designed to do. He also spoke about projects like WebRTC.rs, a pure Rust implementation of WebRTC stack which rewrites the Pion stack in Rust.

While there are still lots of problems with WebRTC that we work around, Dan said broadcasting is looking even more favorable for WebRTC in the future with WebRTC-HTTP ingestion protocol (WHIP) and WebRTC-HTTP Egress Protocol (WHEP) on the way. An integration will work across multiple platforms and you won’t need to integrate individual APIs.

Another theme was the maturity of the WebRTC standard. A sign of this is that many companies are not just looking at WebRTC as a cool tool for standalone prototypes or projects. More traditional industries are now looking at how they can incorporate WebRTC and use it within an ecosystem of other things, like NDI (a high performance standard that allows anyone to use real time, ultra low latency video on existing IP video networks) or OBS (open source software for video recording and live streaming) that have been around a long time. It helps that, as Dan said, “WebRTC is enabled on two billion devices. Everyone’s phone is a WebRTC-enabled phone.”

On the egress side, Dan answered a question about how large can you scale a WebRTC broadcast. With players such as Millicast/Dolby and CloudFlare Stream, Dan feels the sky’s the limit. This kind of sub second latency is perfect for use cases such as online gambling.

There is also an appetite for WebTransport and WebCodecs because it gives more control over what the media is doing. But Dan and Arin agreed that it’s unlikely these will have a major impact on the marketplace for another 5-7 years due to issues like browser compatibility which WebRTC has already overcome.

Get the full story by watching the episode!

NOTE: There were a number of issues with the sync of Arin’s video feed with his audio due to the camera being used, and which was resolved by the end of the live broadcast. Please pardon the inconvenience and we won’t be using that camera again!

Never miss an episode of WebRTC Live, our webinar series hosted by WebRTC.ventures Founder and CEO, Arin Sime. We feature the latest use cases and technical updates to this increasingly popular coding standard for live video. Watch past episodes on our WebRTC Live page, our YouTube channel, and on our blog. Better yet, use the form in the sidebar to join our mailing list and be among the first to hear about upcoming episodes and the latest news in WebRTC!

Leave a reply Click here to cancel the reply