Watch WebRTC Live #59: What Have Our Own Experts Learned Lately?

Home 2021 October Watch WebRTC Live #59: What Have Our Own Experts Learned Lately? 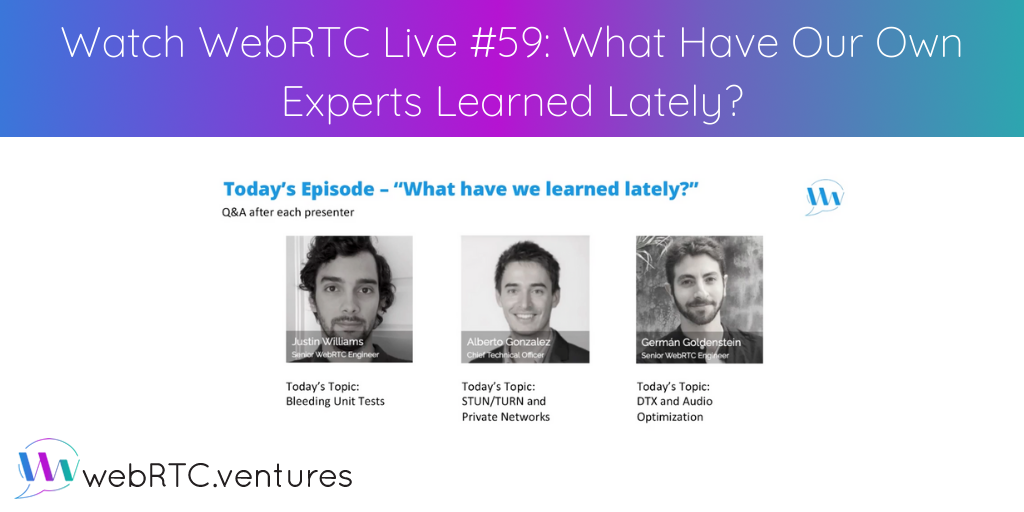 On the September 2021 episode of WebRTC Live, Arin welcomed three of our team’s senior WebRTC engineers to each share a piece of WebRTC wisdom with our viewers. Who better to learn from than those who work with WebRTC each and every day?

First up, Senior WebRTC Engineer Justin Williams talks about Bleeding Unit Tests. Today, with the various tools and services available for WebRTC, there is greater opportunity for rapid development and building new features. However, with this comes a need for unit testing to verify and validate new code. Unfortunately, one common issue we see in unit tests is bleeding. A bleeding unit test occurs when the execution of a test affects the shared state between itself and another test. When running each test separately, they can pass as expected. But when running the whole test suite together, failures are seen. Even worse, these failures can be intermittent, which make them hard to reproduce and fix. Justin delves more into this issue and how it can be solved.

Our CTO, Alberto Gonzalez, was reminded in a recent project of the complexities that come when working with private networks and on premise implementations of WebRTC, as opposed to the ease of cloud architectures. This is especially evident in use cases such as telehealth. His tip is around ICE (Interactive Connectivity Establishment) servers, the use of STUN and TURN media servers, and the importance of testing early, often, and from a perspective that mimics what you are going to see in production.

Our last panelist was Senior WebRTC Engineer Germán Goldenstein. Germán spoke about DTX and audio optimization. DTX is an advanced configuration for OPUS that allows for large reductions in audio traffic (actual amounts can vary based on the number of participants) when a participant is silent. When DTX is enabled, part of the silent audio packets won’t be transmitted, saving both bandwidth and CPU usage. German spoke about the pros and cons of this tip for audio optimization, and the kind of use cases where it makes the most sense.

Register for WebRTC Live #60 on October 20: What WebRTC Developers Need to Know About WebCodecs with Google’s Chris Cunningham.