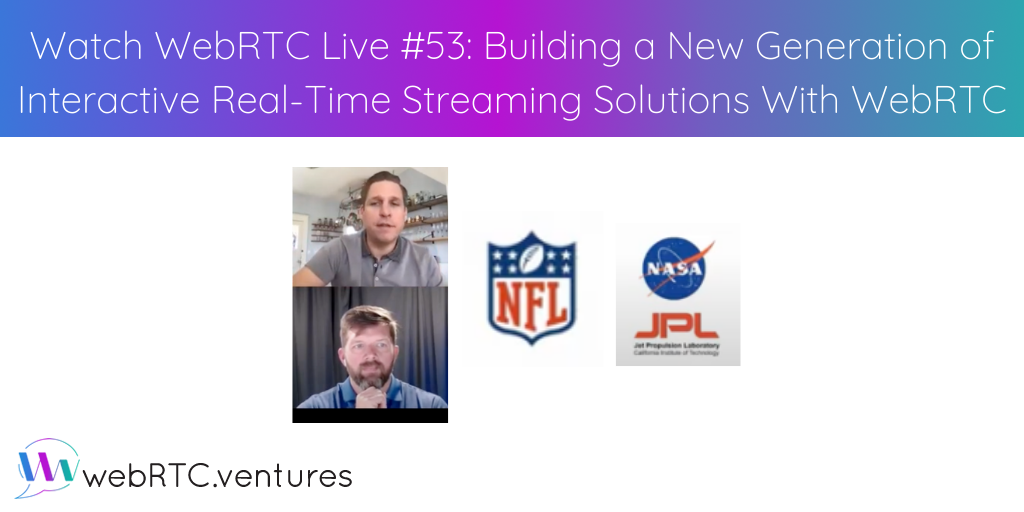 On the April 14, 2021 episode of WebRTC Live, Arin was joined by Millicast Streaming Media Engineer Ryan Jespersen, to explore how the use of WebRTC is expanding beyond the initial core design.

The last year has proved just how much human beings crave interaction. And also that interaction leads to engagement, which we saw in the proliferation of virtual watch parties and virtual audiences at sporting events. But for that engagement to be genuine, the virtual fans at a sporting event must be watching a real-time broadcast in order for their reactions to be well-timed to what’s happening in the sports arena. Traditional television or even traditional internet broadcasting technologies like HLS don’t allow for the type of real-time broadcasting that truly interactive events require.

Millicast is allowing this sort of real-time video streaming to be done at web scale with millions of viewers and thousands of concurrent streams. Ryan talked with us about the use cases and architectures needed to enable those use cases.

As Ryan discussed with us in this episode, no market will be left untouched—from live sports, video-enabled e-commerce, and cloud gaming to remote production, remote fitness, and education.

This was the vision of Ryan’s colleague, CoSMo Software founder and Millicast Co-Founder and CEO Dr. Alex Gouaillard, who tragically passed away in a car accident just days before this episode. The CoSMo/Millicast team decided that Dr. Alex would have wanted “the show to go on.” Ryan and Arin began with a short tribute to Dr. Alex and his impact on so many people in the WebRTC and live video industry. More tributes can be found on Dr. Alex’s blog, http://webrtcbydralex.com/.

Ryan goes into even more detail on the topics he spoke about on this WebRTC Live episode in his talk at Streaming Media Connect 2021 entitled Build the New Generation of Real-Time Streaming Solutions with WebRTC. It can be found on YouTube here.

Dr. Alex was to be our guest for WebRTC Live Episode 54 on April 28 to discuss Unleashing the True Power of WebRTC with Real-Time AV1 SVC. Sergio Garcia Murillo, a Principal Engineer for Millicast and CoSMo Software, will join us instead. You can register for that episode here.